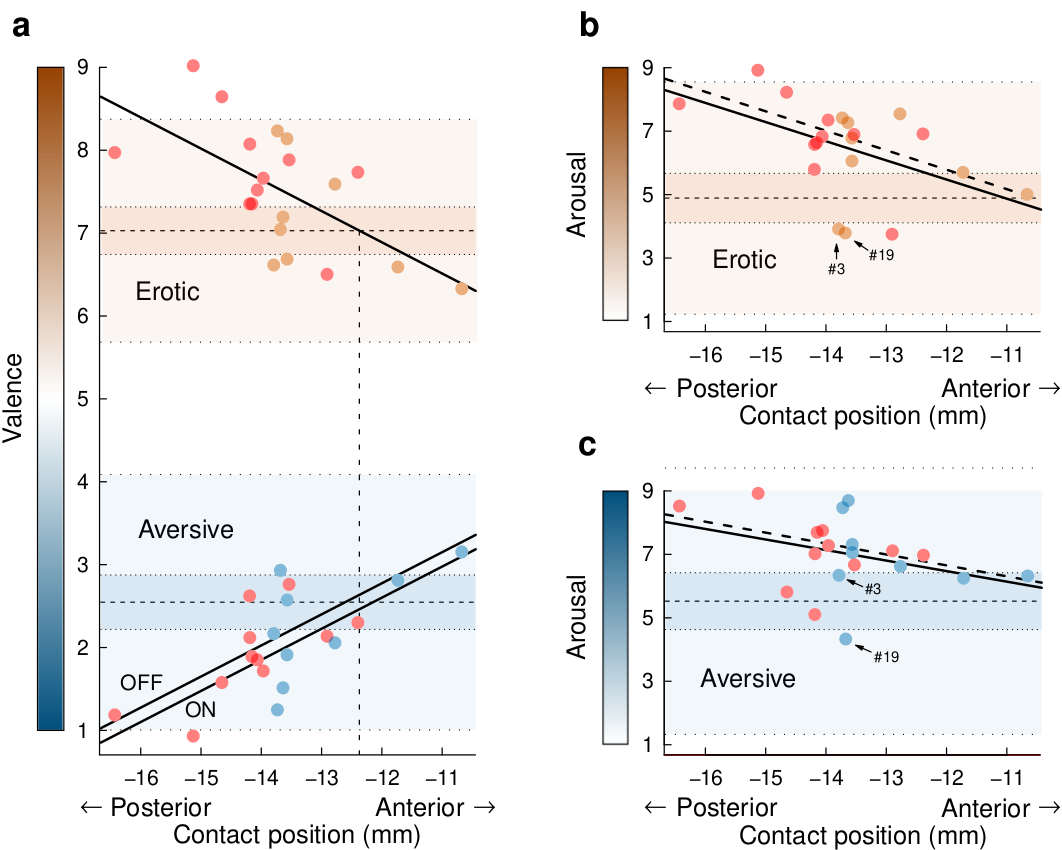 Emotions in the human subthalamus

The deep brain stimulation (DBS) of the human subthalamus (STN) has become a standard treatment for motor complications in Parkison's disease (PD). While the PD motor symptoms can be treated successfully, the STN DBS can be linked with adverse non-motor outcomes including neuropsychiatric side effects and changes in emotional processes.

To investigate the involvement of the STN in motivational and emotional processes, we searched for single STN neurons whose activity was related to emotional stimuli. We found neurons whose activity was directly associated with the presented stimuli as characterized by subjective ratings of valence (unpleasant-pleasant scale) and arousal (intensity). Interestingly, the populations of neurons associated with valence and arousal ratings were distinct, suggesting that the processing of these two affective dimensions is segregated already at the level of single neurons of the STN.

In 20 PD patients treated with bilateral STN DBS, we studied the relationship between the DBS electrode position within the STN and the individual perception of emotional pictures. While the DBS electrode position within the motor part of the STN had no impact on the motor symptom suppression, we identified an anterior-posterior gradient in the perception of emotional stimuli. Furthermore, we identified a sweet spot in the motor part of the STN, where the negative changes in emotional processing were minimized (did not differ from control subjects) while keeping the motor symptom reduction at the optimal level.

These findings are highly relevant for clinical decisions on electrode placement as well as for the understanding of the mechanisms underlying emotion dysregulation reported in the DBS STN.

Nuclei identification from the microelectrode EEG

In order to achieve good clinical outcome with low side effects, accurate positioning of the stimulating contacts in the subthalamic nucleus (STN) is necessary. The most commonly used method of accurate electrode placement consists of 1) preoperative MRI and CT imaging, 2) intra-operative micro-EEG recording around the presumed target position using a set of micro-electrodes 3) post-operative verification of electrode position using MRI and/or CT.

Analysis and modelling of micro-EEG signals from areas around the STN nucleus - which is the core part of this project - may help in accurate electrode positioning, as well as understanding of correspondences between recorded microEEG and pre/post operative MRI.

Artifact detection in the microEEG

Micro-EEG recordings are very susceptible to motion-induced and other types of technical artifacts. As the mEEG signals are often used not only in DBS targetting and nuclei identification process but also in all sorts of neuroscience experiments and unit activity evaluation, it is crucial to identify artifact-free segments. This is a challenging task, especially due to the high variability of mEEG signals from different nuclei, as well as variety of the artifacts. In this  project, we aim at identification of key characteristics of mEEG artifacts and their subsequent detection using signal processing and machine-learning methods. See also the SigInspect toolbox.

The UPDRS is a standardized measure of patients' abilities to perform basic motor skills, as well as the effect of the disease on activities of daily living and mental abilities. Although is UPDRS standardized it is still only a subjective measure depending on the experience and skills of the examiner. An objective UPDRS analysis would be welcomed by examiners to support their decision process as well as it might reveal which parts of STN are responsible for which symptoms of PD and thus help creating a function map of STN and its surroundings. Another possible outcome is to aid examiners to quickly adapt the DBS device to its bearer once implanted. Thus sparing the patient's and examiner's time and suppressing majority of the PD symptoms right after the DBS surgery.

Therefore we would like to find some trade-off between these "subjective" ratings of the patient's state and objectively defined statistical properties (=features) of the patient's single-unit recordings.
However the processing of single-unit recordings conveys many challenges itself as it is not known whether all of the neurons in STN have in influence on UPDRS score or only some of them.

The detection of neural spike activity is a technical challenge that is a prerequisite for studying many types of brain function. Measuring the activity of individual neurons accurately can be dicult due to large amounts of background noise and the diculty in distinguishing the action potentials of one neuron from those of others in the local area.

An advantage of spike sorting is that it is possible to study local populations of neurons that are too close to each other to allow isolation by traditional techniques. If the activity of several neurons can be measured with a single electrode, it is possible with spike sorting to accurately measure the neural activity, even in cases when two or more neurons re simultaneously. This capability is especially important for experimental investigations of neural codes that use spike timing. 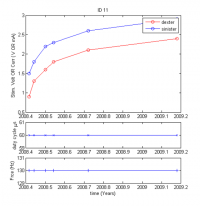 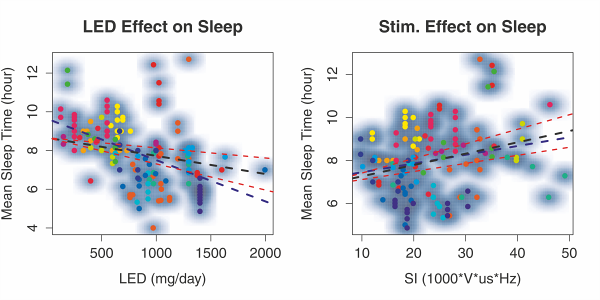 It has been already more than 20 years that deep brain stimulation (DBS) was used instead of pallidotomy on patient with Parkinson disease (PD). This procedure is used to reduce some symptoms of PD and therefore reduce amount of medication needed. In DBS electrodes are implanted in specific part of brain (mostly in globus pallidus (GP) or subthalamic nucleus (STN)). These electrodes are then used to stimulate that part of brain. To increase a chance of stimulating exactly the right place the implanted electrode has usually more leads (4 or even more). The used stimulating current is square-wave. After operation the patient has to visit a neurologist who sets stimulation parameters specifically for this patient. The parameters are:

Stimulator cover is the most common, but different lead also may be used

Tuning of these parameters is possible only in small therapeutic window between effective charge and charge that cause side effects. The parameters have to be adjusted repeatedly due to brain adaptation. The tuning is done according to feeling of patient (sometimes diaries are used where one patient marks how he is feeling) and UPDRS score examined by neurologist. Our aim is to find how the brain adapts to the stimulation and the effect of stimulation on progression of PD. This knowledge may lead to optimalisation of DBS treatment.